Who and what is behind adidas products

I checked: Herzogenaurach counts about 23,000 inhabitants. If you do not know which city it is, you are not alone: let’s say it is not a city (or town, it would be more correct to say) that you would visit on a trip to Germany. Not because it is not beautiful and peculiar, not at all. However, there is a reason why it is famous: because a quarter of its residents actually works for one of its most important companies, namely adidas.

The adidas campus is located a few kilometers from the town, among rolling hills and at the edge of the forest. Its buildings are as far different from local architecture as one can imagine. Using an overused image, they are like spaceships landed from another planet in the German countryside. I like to think of them more as the projection into the future of the idea of innovation that founder Adi Dassler had.

The campus-known as “World of Sports”-got its current shape over the past 10 years. Here are the administrative offices, marketing, research and development, design and prototyping laboratories, the showroom, an athletic field named after Adi Dassler (the Adi Dassler Sportplatz), the rhomboid roof called “Halftime” under which is the canteen and meeting and conference spaces, and finally the original core of the company, in the buildings once occupied by a military barracks.

Here they think and do things

“A place for everything and everything in its place.” I think of this phrase said by I don’t remember who (but which I imagine Adi Dassler would like) as I walk on campus. Each building has a function, and each function is exposed and visible: in the building where the research, design, and prototyping laboratories are located, everything can be seen from the lobby. If you’re not sure what you’re looking at, a giant sign identifies each function: “Makerlab” is where they invent and design shoes and clothing; “The Archive” is the historical archive (40,000 items filed, from the earliest to the latest and another 40,000 to be filed, each requiring 8 hours of work between photos, historical research, product sheet writing, preparation for preservation, cataloging, and placement in the archives); a room full of machines that look like sewing machines but are a bit more complex is where prototypes are born. Etc.

When you walk in places like these you realize what is behind the shoes that hundreds of millions of people wear on their feet. And also behind any sweatshirt, clothing, jacket, and even, most importantly, any sporting record achievements. Because this is where the products are designed that lead the world’s strongest athletes to conquer record after record, as in the case of the Adizero shoes that in recent times have contributed to 54 percent of the victories in major international competitions, setting 18 new world records and always taking technological development one step further (in addition to having been on the feet of Italians Yeman Crippa and Nadia Battocletti, who set new records on the European and Italian 5Ks last Saturday at the Road to Records, respectively).

Makerlab is the workshop where this shoe (as well as all the clothing and a thousand other collections) was born. I imagined that dozens of people were working on it and that there were only computers, but instead the design team consists of less than 10 people. If there were computers, I didn’t see any, except for the ones they use for the 3D printers with which they make prototypes while the rest is a neat workshop with sewing machines, fabric scraps, needle and thread, prints on the walls, a nice lawn outside the glass wall that divides them from the outside.

People here are young and explain to you with passion and enthusiasm how they conceived the shoes of record, how they chose the materials with which to make them, how the company’s tradition inspired them. Beyond design and aesthetic choices, especially underlying certain products intended for performance there are always essentially technological considerations: the best use of materials, dialogue with athletes, trial and error, in a continuous circle all the way to production. To then try again and modify and improve in new products.

In the end, no one ever stands still; dynamism is not just an attitude but is a way of thinking and acting that activates thinking and always shifts its boundaries. Is that perhaps why no one stands still in an office here?
As Adi said, “Never be satisfied with your successes; always keep learning.”

Behind every product-but especially behind the most technical and high-performance ones-there is always its spirit: the pursuit of the best performance and the caring and the tendency to listen to the athletes along with the obsession for victory, for results. After all, its ethics have always been clear since its founding in 1949: “Try, try and then try again,” a mantra to be repeated and never forgotten in search of the uncompromising pursuit of perfection. 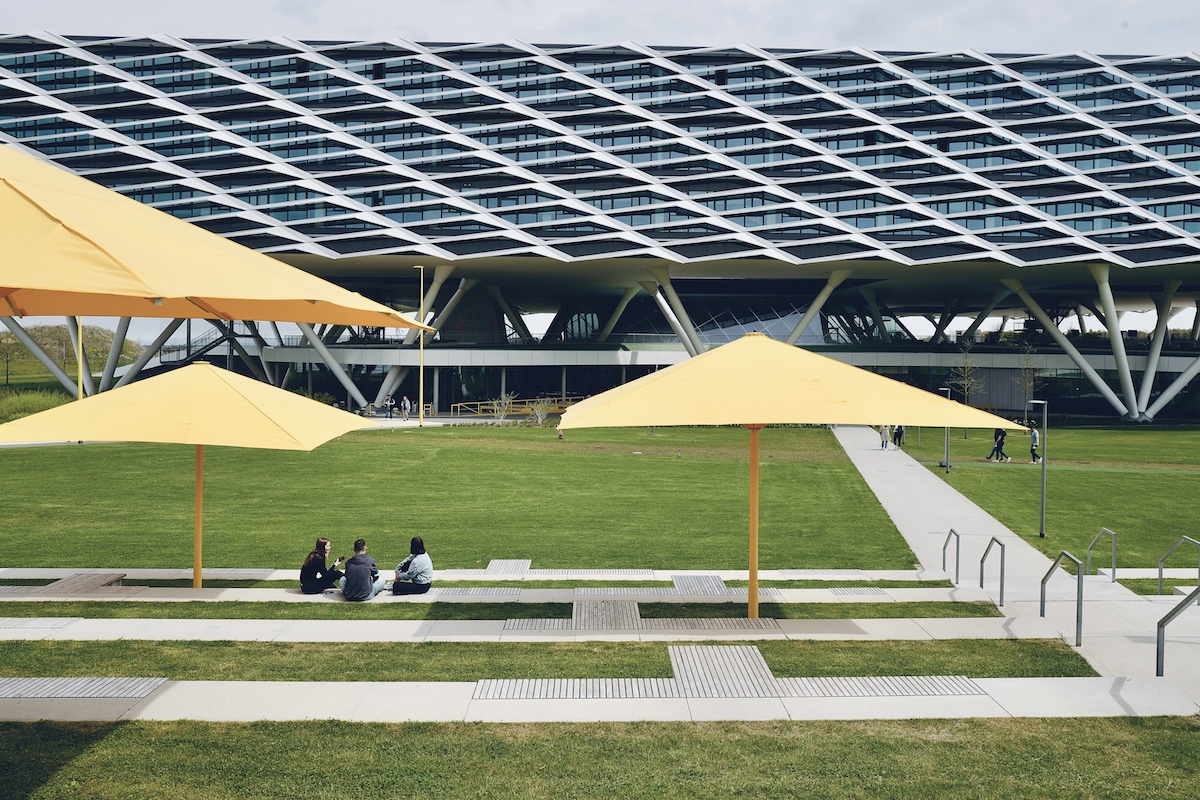 From such assumptions one would expect a hectic and nervous work atmosphere, instead the campus atmosphere is relaxed: some play basketball, some jump on trampolines, some work outdoors, some discuss projects at the table of one of the many cafes. I am well aware that they don’t do that all day long and that they also “work.” They also do that, though: not in an office sitting at a desk but out and about, on the move. There are normal offices as well, but the impression is that much of the work is also done there, outdoor, in the lounges arranged just about everywhere, mingling, making ideas happen. Or playing sports, like running, as happens on the Arena’s covered terrace where there is an indoor track on which employees run at any time of day.
After all, to design athletes’ clothing and tools, you have to try them, right? 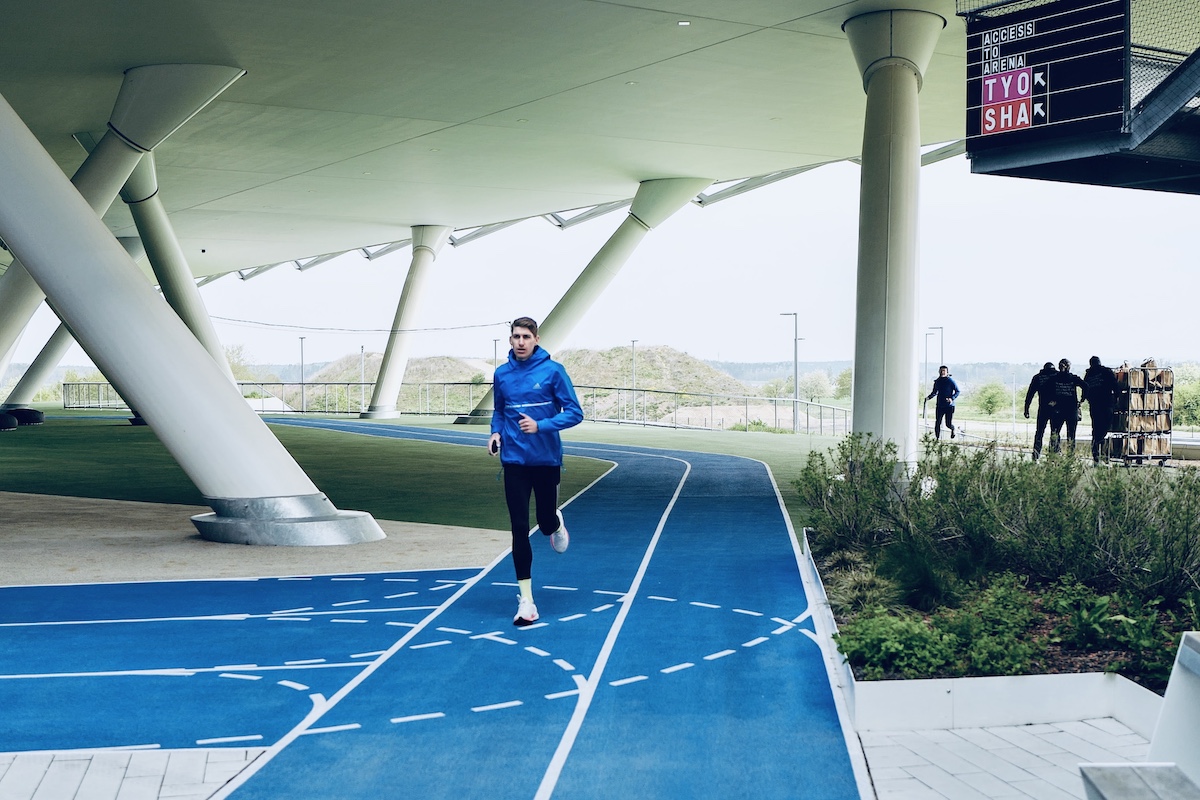 There are different kinds of obsession, and often this word does not have positive connotations. However, there is also the good one, the one that could be translated into determination, awareness of one’s goals, the ability to have a direction and pursue it while making mistakes in the process.
Adi Dassler’s obsession was to create the best products to enhance athletes’ abilities, to make them win or at least to put them in the best condition to do so.
Today-as has often been the case in its more than 70-year history-this is happening in the running world thanks to the development of technological solutions and products that enhance performance and move the human limit ever so slightly further. 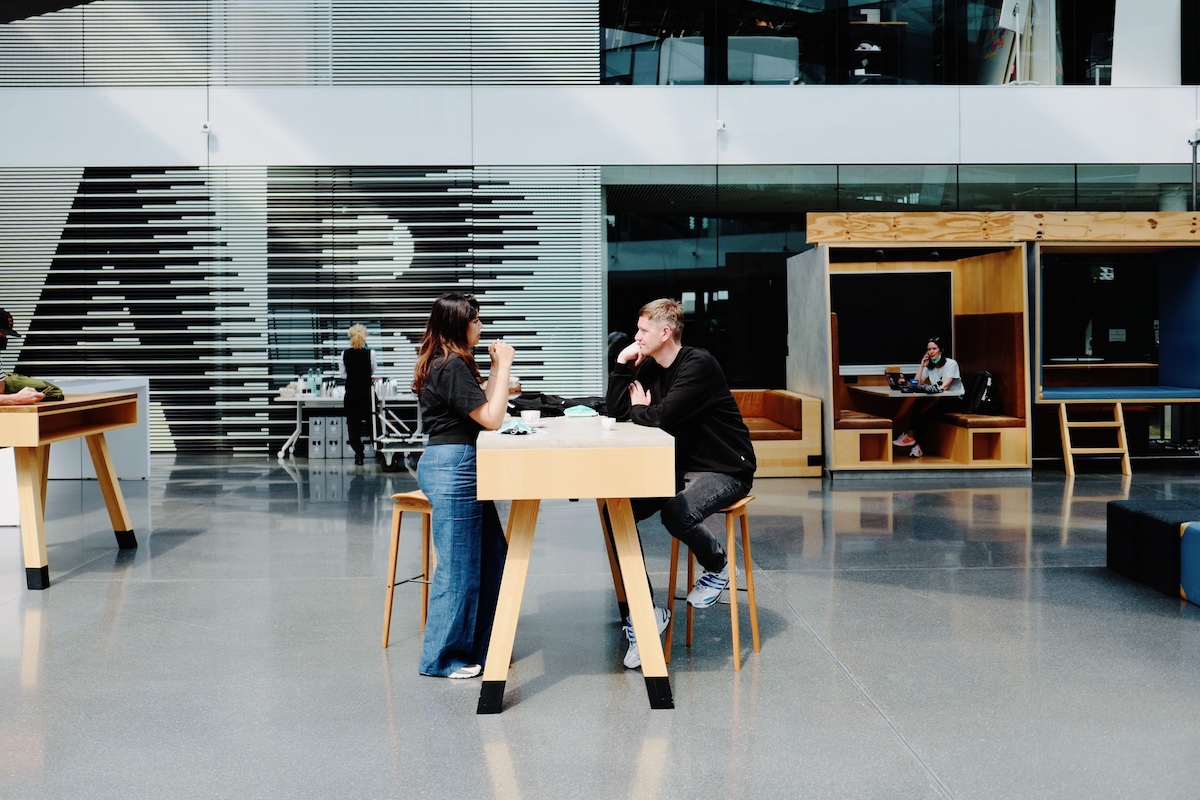 Why is adidas located in a small German town and not in Munich or Berlin? Why when they decided to expand it to its current size did they choose to do it here anyway?
There are several reasons: economic undoubtedly but also historical and emotional. I like to think they did it out of gratitude to these places and to keep in touch with those meadows and hills that gave a local man many decades ago, in a century past, the idea that that was the perfect place to make products that would help millions of athletes and generations of champions constantly improve. Or at least to try, never standing still in the meantime. 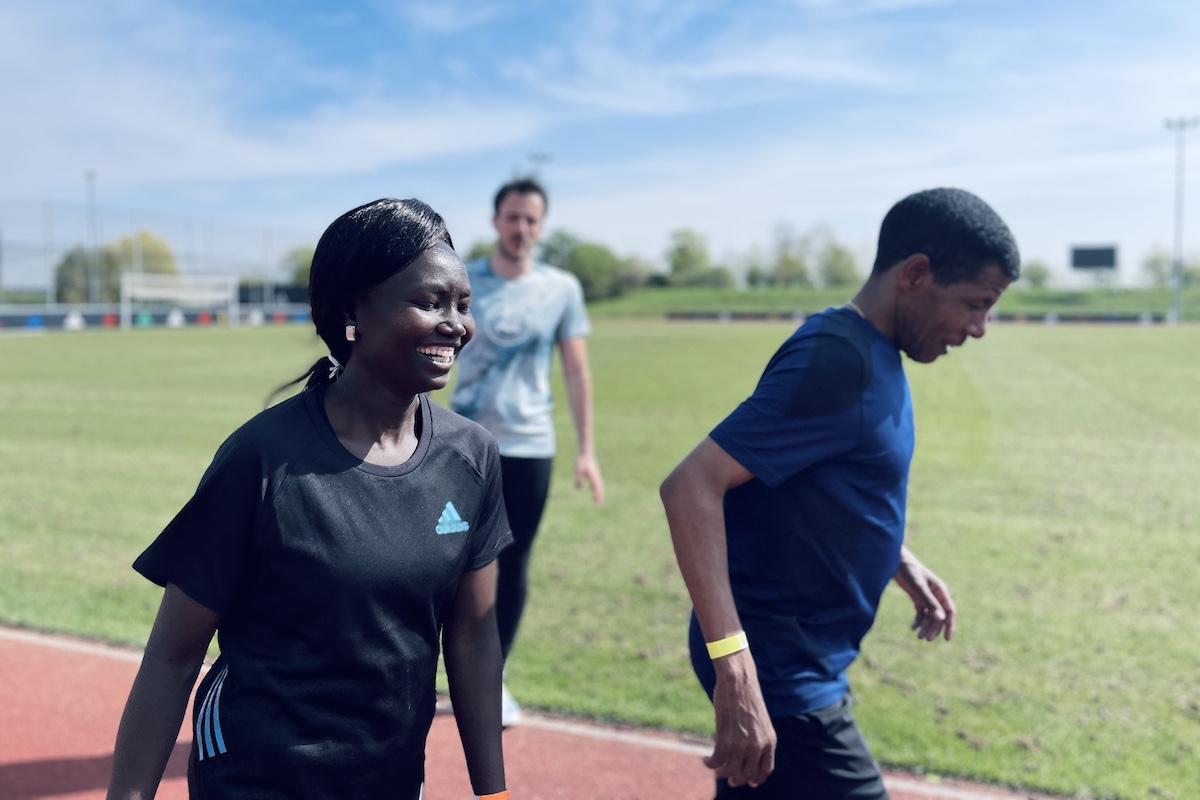 I cannot keep quiet-that is, I must bully myself-that I ran with Haile Gebrselassie and Mary Keitany. A man and woman among the fastest and most successful in the world and endowed with great humanity and sympathy. During a stretch I also took over Haile and told him, jokingly, “Hey, I beat you,” and like a great champion he then replied, “It always happens like that.”
Thanks to adidas for giving me this chance :) 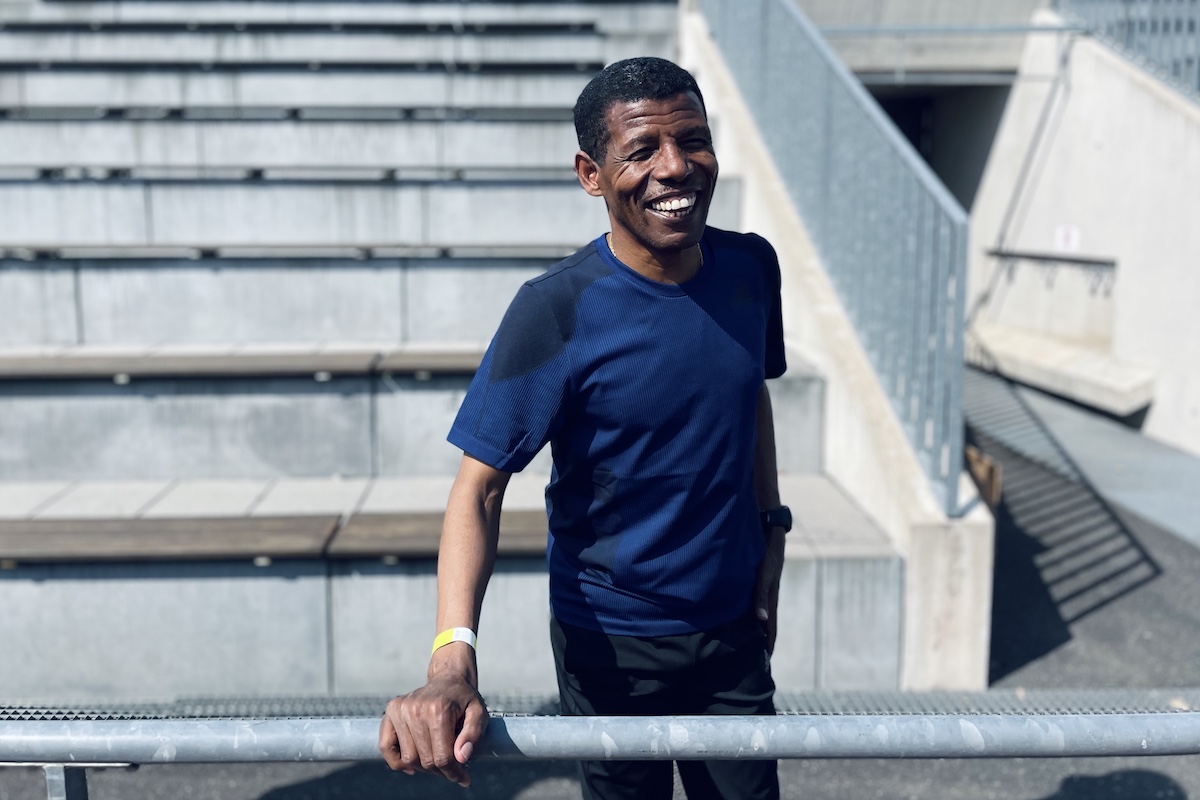