We might begin with a strong and divisive statement: men’s feet are different from women’s feet. That is: it is the truth, it is a fact.
Interestingly, however, this substantial difference has hardly been considered for running shoes. In other words, and except in isolated cases, the market has always offered women’s shoes that descended from unisex or men’s models, “scaled” in number.

The PUMA Run XX NITRO are finally the first to do so.
The “XX” in the name is not a Roman numeration or an uncertainty about which two-letter acronym to use to define them: instead, it indicates the female chromosome and, most importantly, states that these shoes are “only” for women. In fact, it is not a male version adapted to the female foot: they only exist in this one version, that is, there are no PUMA Run XY NITRO.

In short, PUMA takes a clear position on the matter, offering a model that is only for women and designed on the conformation of the female foot and based on women’s habits and demands.

The detail that is immediately striking is that rear fork that starts at the midfoot at the bottom of the midsole and rises to hug the heel at the Achilles tendon. It is a stabilizing system called RUNGUIDE and is made of TPU, which is a rigid plastic that helps hold the foot in place by centering it during running.

Listening to many runners made PUMA realize that one of the most requested features was in fact stability. Combined with comfort and responsiveness, and for those there is the NITRO midsole, the nitrogen-added foam with great energy return and elasticity.
The look of the Run XX NITRO, especially in the detail of the RUNGUIDE, has something 80s about it, the difference being that it is a technical solution and not an aesthetic embellishment. Needless to specify that it is a very beautiful, original and in some ways courageous detail. And functional, above all. But we’ll get there.

Let’s try them on 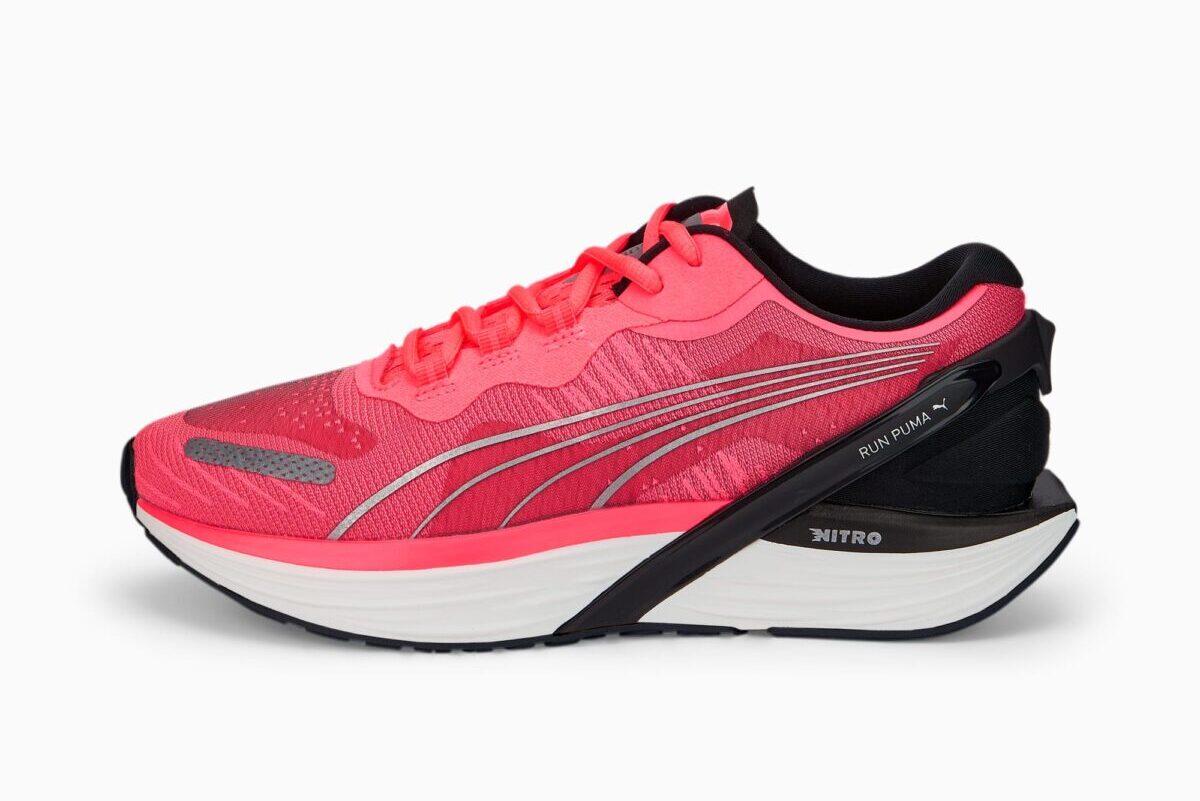 The fit is perfect and very comfortable. Confidence with the NITRO midsole is immediate and immediately makes you want to run. What you notice right away, however, is another welcome detail: the toebox is a little more generous than usual, and your fingers will thank you.

Another not minor detail: the stated number matches the actual number. It sounds absurd to say, but sometimes it happens that you run in shoes that are nominally a size but worn are either plentiful or scarce. In other words: choose them in your exact number and you won’t regret it.

The upper is quite breathable and the tongue is perforated to promote air exchange. It has the “right” size, so it does not rise too high on the instep but risks being too right for a foot that totally fills the shoe. As always, a test can get rid of any doubt, also because it is not necessarily the case that even though it is a model expressly designed for women, it fits all women :)

Having become familiar with them, we need to test them.
Compounded by the lousy weather these past few weeks, I could hardly try it in the dry: it was either raining or the asphalt was slick. Problems? Not at all, because I appreciated even more one of their strengths, and that is the PUMAGRIP technology of the sole: a tread that gives so much grip on the asphalt and communicates great safety.

The responsiveness of the NITRO midsole is drier than that experienced in other PUMAs using the same technology. This is probably due to the formulation used, which is less soft and therefore apparently less “bouncy.” It is a characteristic of theirs that some may find perfect and others less so, but it depends on tastes, habits and especially feet. After all, every foot has its own shoe, and I was comfortable in the long runs I did with them. By the way: I appreciated them more over medium-long distances (20k or so) than over short distances. I think it’s a matter of personal psychological predisposition: in fast workouts and on 10k’s I prefer something softer and less protective, while I enjoyed the presence of the RUNGUIDE system especially after the 15k mark, when obviously fatigue is taking over.

The Run XX NITRO have a very straightforward DNA: they are training and mid-length shoes that do not disdain even normal faster and shorter workouts, perhaps not overly technical but fun.
As mentioned, the RUNGUIDE system is more noticeable the more tired the foot is but I take it for granted that it works even in the first few miles, I just don’t notice it since my legs and feet are still full of energy.

Ultimately, shoes should make you run without thinking about what’s on your feet, and these PUMA Run XX NITROs do just that. Their nature manifests itself better over distance than over speed: the more you run with them, the more you appreciate them, especially during longer workouts.

Finally, the price: 130€ in the best sports stores and in the PUMA online store are an excellent value, in line with PUMA’s aggressive and attractive pricing policy, benefiting those who buy them, namely us.

Altra Via Olympus, a shoe to really go the distance

adidas Adizero SL: speed for everyone

UA HOVR™ Machina 3 Storm: comfortably in the storm and beyond

Under Armour HOVR Infinite 4: comfort for many miles