Do you have piriformis syndrome? Then try these exercises

Until a few months ago I had only heard of the piriformis and knew vaguely (very vaguely) where it was located. Then, one fine day, my left pyriform decided that we needed to get to know each other better. After a normal stretching session I began to feel a tingling sensation that sometimes degenerated into muscle fatigue to actual pain in my left buttock. I decided to get to know it even better by looking for a picture of it. Its name comes from the form it takes: In fact it looks like a triangle-shaped band of muscle fibers (well, obviously) extending horizontally from the pelvis to the head of the femur. Can such a small muscle hurt so much? Yes indeed. 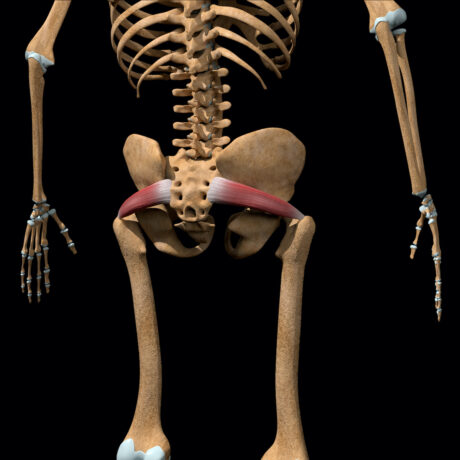 The piriformis also has some fundamental functions in biomechanics: being connected to the femoral head, it is responsible for controlling leg rotation and hip joint. In other words, we would have a much harder time coordinating the movement of walking without it.

To make matters worse, the piriformis works in direct contact with the sciatic nerve, and that name alone should alert you. Do you understand why? That’s right: when the piriformis becomes inflamed, it presses on the sciatic nerve, and if the inflammation is very significant, it can interfere with its functioning, spreading the pain to the leg and down to the foot. I consider myself lucky to have suffered a mild inflammation that never spread, but I know people (even very athletic people) immobilized by pain. This is to say that you should not neglect it, ever.

What if it hurts?

Dutifully premised that any self-diagnosis is to be avoided unless you are from the field, when suffering from piriformis syndrome and excluding its most disabling forms, some exercises may relieve the pain and attempt to solve the problem.

In fact, the main problem with this syndrome is that the life we lead, including running, does not help to flush it out: we are mostly sitting during the day while pressing on it, and during training we activate it, stressing it even more.

But let’s see what can be done to silence him a little.

This lunge is a stretch to relax the hips, buttocks and thighs. To perform it, bring one leg forward, resting the entire sole of the foot, and, bending the knee, come down until your hands are at foot level. Then extend the other leg backward as far as possible by resting it on the toe of the foot. Finally, straighten your torso by arching it backward, possibly helping yourself with your hands resting on your bent knee.

The name of this exercise comes from the angle at which the leg bends at knee height. The purpose is to alternately rotate the hips one inside and one outside the pelvis. To perform it you have to sit and bring one leg bent at 90 degrees (keep also an “hammer” foot) to the outside and one to the inside of the pelvis. Be careful to align your inner leg as much as possible with your hip (don’t keep it too far inboard, in short) and try to distribute your weight as evenly as possible on the two hips, not leaning too much on one and less on the other.

3. Stretch of the piriformis

Lie down resting your entire back and neck on the ground and bring one ankle over the opposite thigh as if you were to cross your legs. Then grab the leg on which you rested your ankle with two hands behind your knee and pull it toward your torso until you feel your glutes are tense. Hold the position for 30 seconds and repeat symmetrically.

Plyometric exercises, a difficult word for an easy thing!