Running in the metaverse

Mark Zuckerberg spoke about themetaverse in late 2021, pointing to the near future of Facebook. Many noticed something familiar, and in fact it was (and is) not a new idea: those of a certain age have already heard it referred to as “virtual reality,” that is, a set of non-real or synthetic/digital experiences that require special viewers and equipment.

After a few months, the metaverse is still a very ill-defined dimension to which very few have had access. To be brutal, it already looks decrepit, even though it is technically unborn.

That is why the headline of a Business Insider article about a gymnasium where people run in the metaverse caught my attention, even though it is not, at least, the experience Zuckerberg has in mind. So what is it all about? It’s an immersive and partially virtual running experience (while the metaverse is entirely virtual, or at least 90 percent, still remaining mediated by visors, etc.) that can be experienced in a small gymnasium in Manhattan.

If the Roam149 gym’s proposal had consisted of a visor to be worn and then run on the spot I confess I would have moved on. If, similarly, it had been a simple treadmill with a somewhat larger screen on which to “run” along real or invented paths just as much, even considering that for those who ride on rollers this kind of experience is commonplace (and does not require going to a gym, considering that it can be done at home).

The equipment in this gym, however, is more sophisticated and interesting. First of all, you run inside “boots” that isolate and focus your attention only on the big screen, which, being located a short distance from the eyes of the runner, provides a very immersive experience. You can experience it without visors and completely free of any kind of tools: in fact, every command is given with gestures, thanks to a camera that “reads” your gestures and transfers orders to the system. 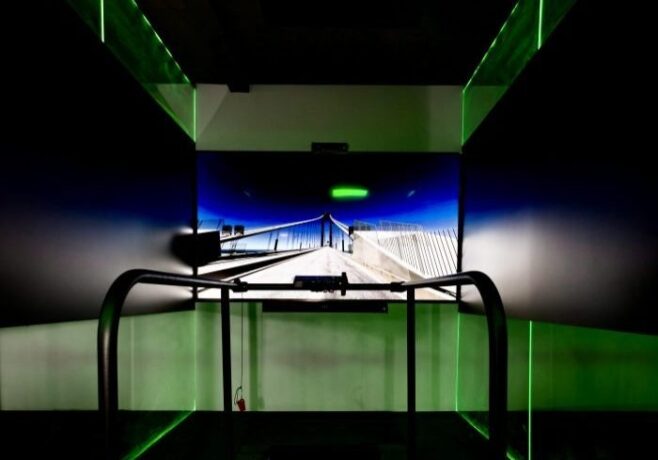 The concept behind this technological solution is that an experience is more real and powerful the less it is mediated. If we have to use special tools-often even cumbersome and heavy-to experience it, it is obvious that naturalness is lost. This is why Roam149’s treadmills gently simulate the roughness and slope changes of the (virtual) terrain on which you run, which is also why those who designed this type of solution understood that it had to be as simple and intuitive as possible.

Better than the metaverse?

In short: technically-as we were saying -this gym does not offer an experience built entirely in the metaverse. In truth, one can choose from both made-up and real routes, perhaps realizing what it is like to run the Boston Marathon through real footage. Or it can be done in a synthetic world but still without the mediation of any tool.

While it is true that nothing beats the real experience, it is also true that the idea of running on a cold winter’s day in the warmth of an environment quite similar to the “real thing” is irresistible.

It is not the metaverse but it may be even better than it.