How about start running at 45? Here is the perfect program

Does starting to run at age 45 seem like a challenge like climbing mount Everest? No, not at all. It can be the most natural, smooth and exciting thing to experience a second youth in wellness. If you’re choosing to practice running because you’re hoping it will make you look ten years younger than you are, well, that’s called a miracle. And although running is something amazing maybe it will not give you this result. That said, one certainly feels younger, more beautiful and healthier. In fact, you don’t feel, you actually become one. As long as we adhere to focused and precise schedules and a few tricks.

Starting to run after the age of 40 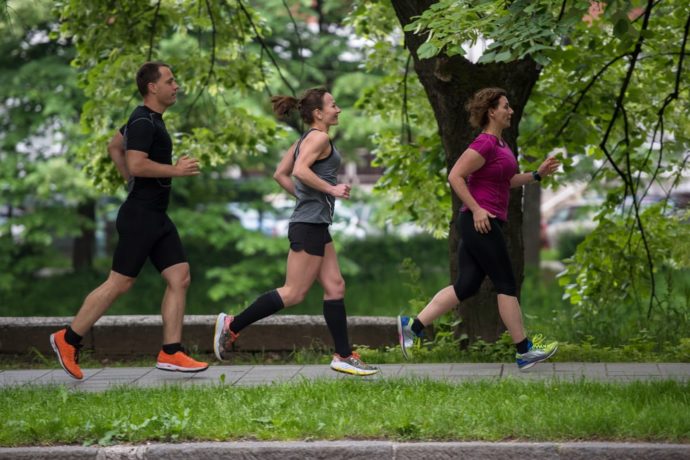 The title of the paragraph sounds almost sensationalistic. But it is not our intention to say that starting running at age 40 is something absurd. Our community is full of virtuosos over 40 who can give a lead to cocky beginners in their 20s. They have an immense wealth of advice to dispense for all those who are passionate about running and want to start practicing it seriously and continuously.

The first rule to keep in mind is to respect one’s state of health, keeping it carefully under control and not forcing the body to undertake too much effort, at least at first. Effectively running has this effect. In the beginning it excites you a lot, making you feel powerful and performing, stimulating a positive change in your body. So you pull the rope, you go the extra mile, in short — at some point you can’t keep going.

Before you hit the road to running at age 45 do your assessments of the goals you want to achieve and the time you want to put in. But take it easy.

Before pointing out a running program suitable for those starting out at an advanced age, we want to summarize the supreme laws that the future “age” runner must adhere to in order to enter the world of running as a winner. We chose to give you five tips. Yes, it only takes five to keep a good pace and pursue the goal in the best possible way. The first we have already anticipated, here you are the rest:

Let’s say that the advantage of not being in your twenties lies in the fact that you have probably already realized that the age when anything was possible is over. Now, have you happened to be pulling late and keeping late hours and that the next day you felt like you were hit by a freight train? Can we console you? Running will reactivate your metabolism, renew your vitality, but calmly. You need to find a slow and steady pace, equip yourself with comfortable equipment and technical apparel for the various weather conditions you may encounter, and start running. In order of importance, nutrition actually stands at the top of the list. You’re not Uma Thurman in Kill Bill, running doesn’t have to become Pai Mei’s workout. A bowl of rice will never be enough for you to take on the running program with grit to start being a valiant runner. Request a personalized diet, follow our advice on the subject, or contact a sports nutritionist.

We wanted to write “running program for over-40s,” but it seemed uncool. It seemed as if we were trying to place you in an alien dimension in which men and women with white hair, wrinkles, and poorly toned tissues move wildly. No! You are not like that, but more importantly, very soon the couch will no longer be your best friend: in your spare time you will have other things to do.

In fact, we talk about time. For a 40-year-old beginner program, weekly workouts can and should be planned, in the number of three. Now, if it is a lot for you reduce it to two, but it is important that especially in the beginning you devote a good amount of time to this new venture.

When you do your first few workouts, you should feel like you are practicing running without exhaustion; at the end of your daily training you should feel good. If you feel out of breath, it means you have gone too far. Take it easy!

Below is a beginner’s program that is perfectly suited to your situation as a “young” running promise. It’s a six weeks program, at the end of which you can already get great results.

Did you see where you got to? Now you are moving for almost an hour, you are in tip-top shape, whereas until recently you were hunched over visions of a future with a cane and slow walking. And because the eye wants its share too, yes, we say it-you really do look ten years younger!