All running in 7 minutes (including the meaning of life)

Forrest Gump’s very famous running sequence lasts a scant seven minutes. In fact less, depending on whether you watch it in the Italian version or the original one.
I had never thought about it, partly because many people remember it only for the last frames on that very famous road, in Monument Valley in Utah. A road so famous that when you see it in pictures-even if Forrest is not there and if it’s not that famous frame-it has something familiar about it. You may not remember where you saw it but you have seen it. It is on that very long straight stretch in the middle of a desert that Forrest, with his beard and very long hair after running continuously for 2 years, 3 months, 14 days and 16 hours, finally stops and with him the group that follows him. They are his followers, literally, because in those years Forrest has become a kind of holy man to them: he says nothing, he just runs, and perhaps the fact that he is so enigmatic makes people believe that he has it all figured out and is about to reveal it to the world. So they follow him, to be the first to hear the words of the holy man, or to end up perhaps enlightened like him.

But the sequence, I said, lasts 7 minutes and is a prodigy and a manual of how to tell a story. In this case a story within a story, since the interlude in which Forrest Gump becomes a runner is one story among many stories on which that film is built.

A story about running

To better understand the power of that story within the story, one must go back almost 7 minutes, to the beginning of the entire sequence. There is Forrest sitting on the front porch looking into an undefined spot. At one point he gets up and starts running down the driveway leading to his house. “That day, I really don’t know why, I decided to go for a little run.”

The important information here is twofold: not only “I decided to go for a bit of a run” but more importantly “I just don’t know why.”
That is why the running sequence in Forrest Gump is a milestone not only in the history of cinema but also in the history of running and, let me tell you, of society and life. But I get there.

In the minutes that follow Forrest runs. And runs. And he still runs. As he runs he meets people and they ask him over and over again why he is doing it. An old lady sitting beside him on the famous bench asks him, “So you just run” and he replies, “Yeah!”

Curiosity grows more and more until first the press and then television talk about it. This man who just runs elicits sympathy and respect from everyone. Reporters (running after him) ask him if he is doing it for the environment or to protest this or that, and he just thinks that people can’t believe that one runs because he feels like it. And he wonders. Forrest is someone who can marvel at anything, like a child. And like a child he does useless, non-productive things. He has no purpose except to run. And that’s it.

That is why he arouses so much curiosity: those who follow him or those who inquire about the progress of his endless journey are drawn to him because they see in him the child they have forgotten to be. They all vaguely recognize in him what they were but do not identify with him. Not yet at least: to everyone he is that slightly bizarre – very bizarre – guy who just runs.

A portrait of our society

To render this sequence even more perfect is a subtext of ironic and fierce critique of society: the consumerist and capitalist society whose only goal is profit but which, even in obtaining it, always remains dissatisfied. That’s why it’s looking for answers elsewhere, even in a weirdo who runs. It mistakes him for a holy man, expects answers from him. When he stops on that road his followers freeze and start muttering, “Stop! He’s about to speak!” They are ready for the revelation, finally telling them what to do or what the secret of life is. But he just says, “I’m a little tired. I think I’ll go home now.” 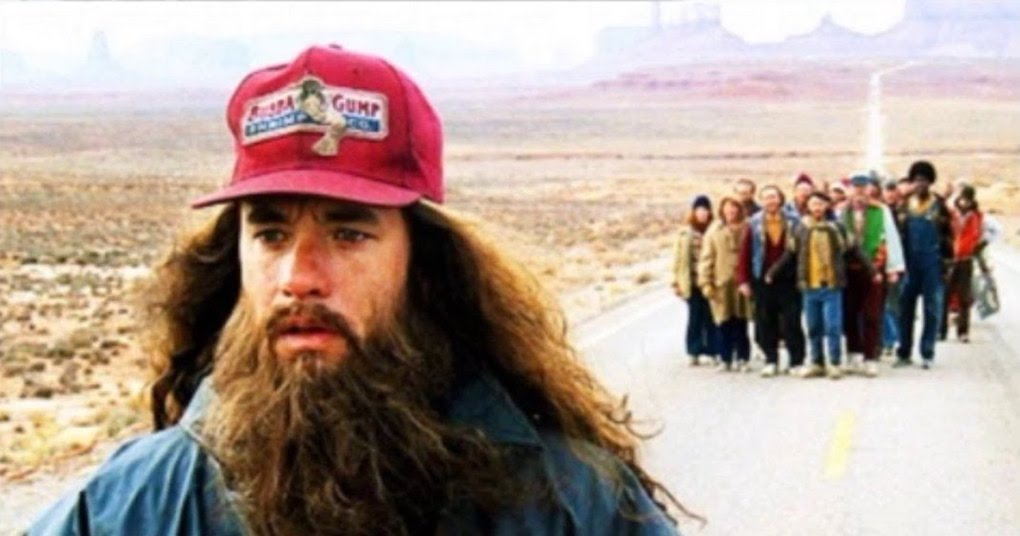 This is the punch-line, as they would say in comic jargon: it’s the punch line that comes at you like a punch in the face. It was preceded by a dense narrative of events constructed to create a crescendo: a 7-minute-long action that has to come to some outburst. And it does come, “I’m a little tired.” The viewer finally relaxes. And laughs. Until he realizes that there is no solution at the end either: that little story has an open ending: it is not resolved because it does not explain why Forrest ran. On the contrary: it shifts attention elsewhere, understandably to his somewhat tested physical state. But the moral is there, if you look at it: there is no meaning in running, just as there is no particular meaning in the whole of life. You run because you feel like it and you live the same way. Because you may not know how to do anything but run or live.

Forrest Gump is you

In those words and sequences you can recognize any runner: there is no particular reason for doing it or there are many small reasons that not even added together make an explanation. Do you do it to lose weight? You could be on a diet. Do you do it to meditate? Meditate in front of the sunset. There are a thousand other ways to do what we say we want to do through running, and the only reason we ultimately do it is because we feel like doing it. Because I think, at the end of the day, it is one of the few things that reconnects us with being a child: it was good to be one. It was nice not only to have no particular purpose but mostly it was nice to do things because we just felt like doing them. The purpose of our life was to do things, because that’s how we felt. That is why Forrest Gump is about running but it is mostly about us: how we were and how we would love to be again. By running we succeed.

(Photo by Gerson Repreza on Unsplash)